IRIS® proves its place in an urban setting by surveying skies above Dutch Prinsjesdag - the opening of the parliamentary year in the Netherlands.

From agriculture to film-making, delivery and even policing, drones can add a lot of value to today's world. But the advancing technology that makes them an attribute to society is the same reason they are a formidable threat.

The laws surrounding the use of drones vary across the globe, with many hobbyist pilots unaware of exactly how and where they may legally fly. That causes a severe safety risk to busy and restricted airspace.

Drones pose a particularly nasty challenge for security teams and police. They're difficult to detect, widely accessible and can be adapted to aggressively target critical infrastructure and even VIPS. Even drones flown for leisure, without malicious intent, can cause havoc in secure airspace. There’s no sure or fast way to know what a drone’s intent could be.

That’s why it's critical to be able to detect and track exactly what's happening in the skies, especially over large, public, secure or high-profile events.

Prisons, military sites, critical infrastructures and high-profile political and commercial events have to deal with the same challenge. Drones are elusive, can move fast and erratically, and can cause chaos in a matter of minutes. Seconds, even.

There are multiple technologies designed both to detect and, depending on each unique situation, even counter drones. The answer to a truly robust solution often lies in combining technologies to achieve a system layered with different sensors; each with their own strengths and challenges.

Something they all have in common, is that their least favourite environments are busy and heavily built-up. Many large, moving and awkwardly-shaped objects like buildings and traffic cause reflections, echoes and block line of sight and signals. This makes detecting small objects in an urban setting a tricky business.

High-profile events such as parades, political summits and sporting events taking place in cities or built-up environments are particularly vulnerable to drone threats. And they’re the most difficult to protect from them.

Typically attracting large crowds of people and occurring in bustling urban areas, the skies above them can be as busy as the events themselves. They often require aircraft for surveillance, the arrival and departure of VIP's and even demand legitimate application of drones for security, media and more. That means authorised activity must also be clear so that unlawful aircraft or drones can be identified immediately, adding another layer of complexity.

The large numbers of people attending not only provides a perfect cover for criminals with malicious intent, but the mass of cell phones can also limit the performance of Radio Frequency C-UAS sensors. Plus, cameras and acoustic sensors both have a hard time with the volume of activity in the air and on the ground, and radar is no exception. Reflections of numerous facades, differently shaped high-rise buildings and busy airspaces makes distinguishing small unauthorised drones exceedingly difficult.

There are ways to overcome the hurdles. Deployment is critical for effective performance in busy urban environments.

Sensors need to be deployed at multiple locations to combat shadowing effects, positioned carefully to overcome the (majority) of reflections of facades. A combination of different sensors and sensor types also allows for high individual sensitivity.

And this is where our experienced team of experts - equipped with an epic radar - comes in. A radar we have optimised explicitly to detect drones in challenging environments. Alright, we're biased. But it’s hard not to be excited by the way IRIS® performed at Prinsjesdag recently. 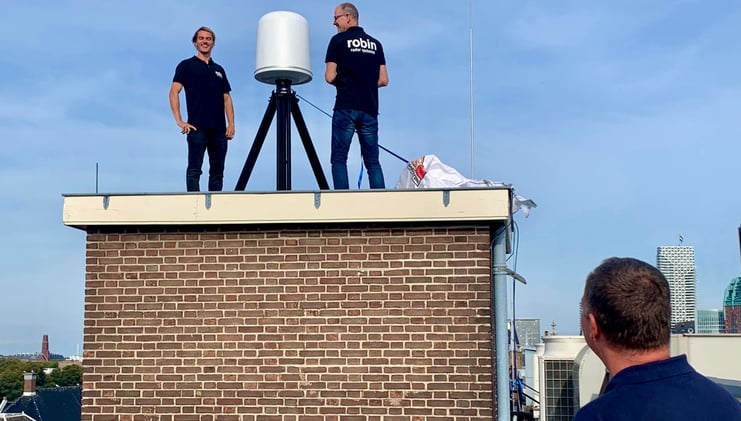 Prinsjesdag - 'Prince's Day' - took place on 21 September 2021 in the heart of The Hague, Netherlands. On this day, the King delivers a speech containing the government’s key plans for the year ahead, from the Throne. It officially opens the parliamentary year and sees huge crowds in attendance.

Despite the challenges, IRIS® performed well, as the primary sensor, throughout. The system, made up of radio frequency sensors, a camera system (our) drone radar and a C2 system at its heart, experienced minimal issues.

False alarms are often inevitable in busy and cluttered environments, but the favourable SWaP and auto-calibration capability of IRIS® enabled a very fast deployment. That meant sources of false alarms had been established before the event even began.

Need to detect and track drones in your airspace?